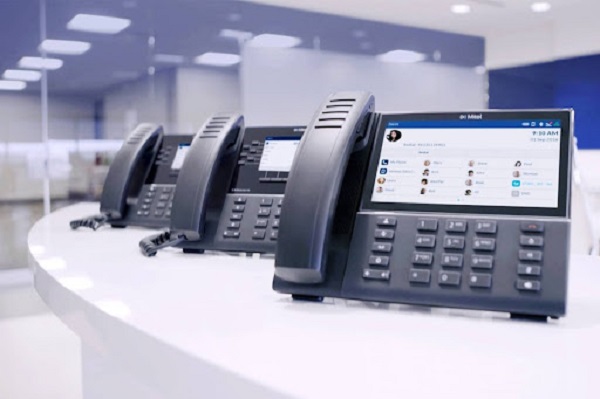 How does VoIP work?

During a conversation, your speech is converted into a digital signal, compressed and sent over the Internet. Since a network is used for Internet telephony or IP telephony, the voice packet must be digitized and packed into a data packet.

This means that the same line can be used for data and voice. The data packet then contains control information for establishing the connection as well as the language.

In order to establish a connection, the IP address of the called subscriber must be known in the IP network. There is no fixed address as with landline connections (PSTN) in IP-based networks.

The accessibility of the called party is made possible by prior authentication and the associated notification of the current IP address. A fixed assignment of telephone numbers to IP addresses is not possible due to dynamic address assignment when establishing network connections.

Therefore, a computer (server) is used for the solution, to which the participants or their end devices and the current IP address are communicated. This information is then stored under a user name.

In IP telephony for private users or small companies, a router takes over the function of the server.

Instead of using telephone lines, a find voip phone ip address telephone system uses the Internet protocol, ie all communication data is converted into packets and sent over the IP network. Placing calls over traditional telephone lines means that one line is occupied by the two callers who use it to communicate. Because there is only a limited number of lines that can be installed, calls over the landline, especially long distance calls, are expensive. However, using the Internet to forward call data circumvents this problem, making domestic and long-distance calls cheaper overall, often free of charge.

IP telephony has clear advantages over the classic telephone network in terms of voice quality, which is due to the digitized data packets.

One of the additional cost benefits of VoIP is the low cost of the hardware and software required to run the system.

Every company has a network, so VOIP telephony solutions can be installed quickly and inexpensively, because the same network is used for VOIP as for the data.

If a company has branches around the world, they can call each other using the same IP telephone system at no additional cost.

VoIP systems allow you to connect a variety of devices to increase the productivity of your company. Some medical offices rely on it so much they use as their healthcare phone system. Additional features include functions such as caller ID, virtual phone numbers, contact lists, voicemail and many more. All of these functions can be used in a variety of ways, eg you can forward messages or voicemails to several colleagues with a single click.

The functions of a VoIP service can be flexibly customized based on a company’s unique requirements.

If you are using a traditional telephone system it is possible to take part in conference calls, but you have to pay to receive multiple callers in one call. With VoIP telephony, this service is integrated into the service and thus saves you the costs.

One of the advantages of VoIP flexibility is that in the event of an office phone failure due to a lack of a network, calls can always be routed to cell phones and other devices. It also means that weather problems and power outages are no longer the risk they once were.

What is required for IP telephony?

Since voice and data are transported over the Internet or network with VOIP telephony, Internet access with sufficient bandwidth is required in any case. Internet access is available from a provider. This will provide you with a telephone number and a user ID. Depending on the contract, the provider is paid at a flat rate or on a minute-by-minute basis. You also need a server or router that will set up the connection for you. In the private sector, the router is often made available by the provider. Then you still need the appropriate end devices, ie telephones or softphones with headsets, to establish the connection.

In short, you need these things for Ifind voip phone ip address:

What is a SIP phone?

What is an IP phone?

What is the difference between H.323 and the SIP protocol?

Both protocols support VOIP but were designed due to two different requirements. The H.323 protocol is a binary-based standard that was developed by the International Telecommunication Union (ITU) for rich media communication over the IP network. The focus was originally on video conferencing. Due to the clear structure of the H.323 protocol, one can always assume that all H.323 implementations are compatible with each other.

SIP protocols were developed by the Internet Engineering Task Force (IETF) to establish a connection between two points (pear-to-pear). The focus here was always on voice communication. SIP is an ASCII text based standard. SIP is also expandable; developer functions can always be added to SIP. For example, one of the features of SIP is application sharing, presence displays or instant messaging, to name a few. SIP is not always the same as SIP – implementations are not always compatible with one another. The SIP Forum took care of this aspect and established compatible implementations, which are called primitives, with the manufacturers. SIP has evolved over the years, group calls, conferences, video, Call recording and routing of voice traffic are the result of this development. Many providers of IP telephone systems use SIP, especially providers of platforms for hosted telephone services make use of this protocol.

Red Land Cotton Review {2022}: Is This Website Real or Fake?

Northern Tool Wichita Review {2022}:Is Trusted or a Scam?