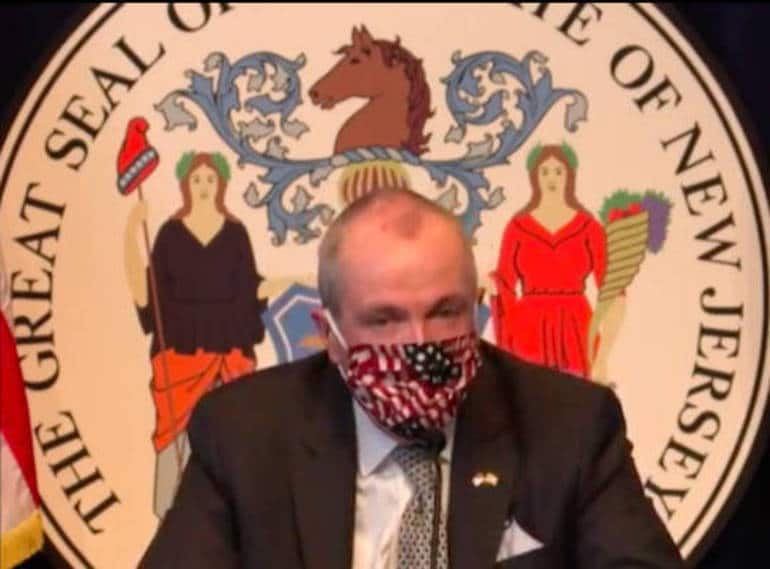 “The numbers may be low as a result of a network outage we had yesterday. This may have prevented all cases from being processed,” said Murphy.

Throughout their reports, Murphy and Commissioner of the NJ Department of Health, Judy Persichilli reported positive news.

5,287 patients are being treated in hospitals for COVID-19. “This is a drop of about a thousand in five days,” said the Governor.

1,610 cases in critical or intensive care. “This number, too, has decreased in the past six days,” said Murphy.

Persichilli reported that 74% of these patients are on ventilators which is a significant drop from the high of 97% from two weeks ago.

362 new hospitalizations and 335 patient discharges. “Our hospitals continue to show the positive trends we want and need to get on a steady position to get back on the road toward a responsible restart of our economy,” Murphy said.

245,319 New Jersey residents have been tested and 99,368 tested positive so far, according to Persichilli. This is about 1.1% of the state’s population.
Murphy noticed one issue: “Not enough masks,” he said. “I’d say probably 80-90% of the folks were not wearing masks. That’s something we have to continue to pound upon.”

Overall, he felt the re-opening went well. “Up and down the state we heard very few incidents of knucklehead behavior that would require me to reverse course and close them again,” he said.

The Superintendent of the New Jersey State Police Colonel Pat Callahan agreed: “From Sussex to Cape May, just overwhelming compliance on what everybody knows were two gorgeous days,” he said.

“The behavior that you all showed this weekend is going to give us more degrees of freedom,” said Murphy. “Through that behavior the curves will continue to come down.”

Murphy mentioned that the Department of Labor had been working on independent contractor claims last week and by catching up on those, they fell behind on the regular “bread and butter claims” as he called them.

“Then the entire state system crashed over the weekend,” he added. “We’ve been overwhelmed.”

Addressing the camera, Murphy said: “The message is: We understand your frustration. Stay at it. We deeply appreciate your patience. And, know that you will not lose one penny of what’s coming to you.”

Bnrthrifting com Review {2023}: Do You Know About This Site!