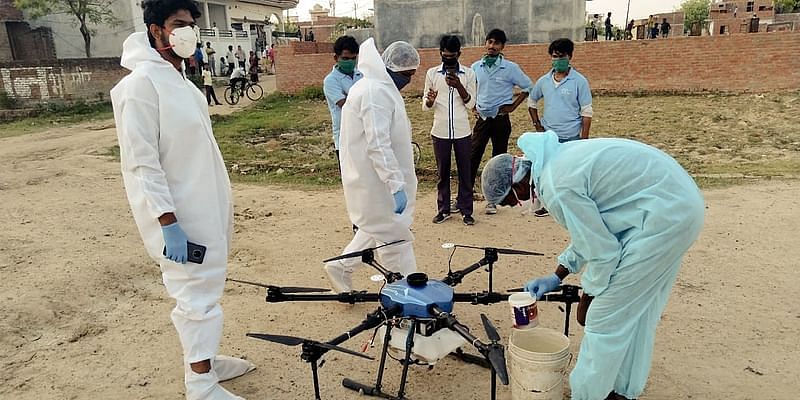 Chennai-based Garuda Aerospace is one among them. Founded in 2016 by Agnishwar Jayaprakash, the startup, which has built several agricultural drones, is now helping the government in drone-based sanitisation projects.

“We have drones for 38 different operations, which include sanitisation, agriculture spraying, mapping, industries, security, delivery, and surveillance. We have individual departments for manufacturing parts, importing parts from other countries, sourcing parts from domestic partners, foreign institutional R&D partners, an indigenous autopilot division, and finally an assembly line to bring out the finished product for testing and calibration,” says Agnishwar.

Did you know drones are also being used in mapping geo-spatial data during the COVID-19 crisis.

Drones were what science fiction was made of – always hovering around, and creepily spying on people. This was the case, at least until recently, when their usage became quite mainstream. From pizza deliveries to acting as a vigilante catching reckless drivers, there is hardly any sector today where drones are not proving to be of help.

But if there is one thing they can do better than anything else, it is capturing geospatial data. They are believed to be better than even a satellite. And this is what inspired Ayushi Mishra and Utkarsh Singh to start Drona Maps. Founded in 2016, Drona Maps helps capture reliable and robust geospatial data to create large-scale 3D maps from imagery collected through drones.

In fact, Ramayan viewership is now being compared to that of the IPL, which is typically a trendsetter on TV and OTT platforms in India. However, Doordarshan has not restricted itself to these mythological shows. It has opened its entire closet of retro shows such as Buniyaad, Byomkesh Bakshi, Gora, Shah Rukh Khan’s Circus, late Irrfan Khan’s Shrikant, Shaktimaan, and The Jungle Book to its audience. In an in-depth piece, we take a look at how Doordarshan is rediscovering its glory amidst the lockdown.